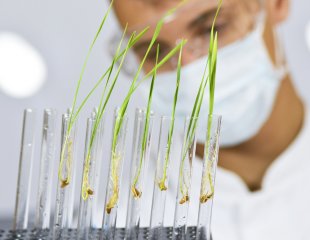 You may not have heard of it, but GE grass has quite a horror-film backstory. Once destined for golf courses nationwide, Monsanto first petitioned USDA for approval in 2002. Scientists were very worried: like all GMOs, the GE grass could cross-pollinate with related wild species, and spread uncontrollably. Because their tiny seeds and even lighter pollen can be carried on the wind for many miles, and they have lots of relatives they can cross-pollinate, GE grasses are even more assured to spread and contaminate other plants than other GE crops, like GE corn or GE soy, are. And like all of Monsanto’s GE products, they were engineered with the sole purpose of selling more Roundup to douse on them, which has resulted in dramatic increases in the pesticides entering our waters and native ecosystems. So when the GE grass did escape, farmers and regulators would have a superweed to deal with, one that would require even more toxic herbicides to kill.