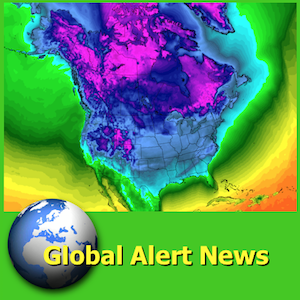 Biosphere collapse will push power structures to total desperation. As has been stated so many times on the Global Alert News hour, the rapidly unfolding implosion of the global climate and countless ecosystems, along with the quest for remaining resources, is (and will continue to) fuel unbridled aggression from military industrial societies like the US and it’s allies. So far the vast majority of first world populations (whose lifestyles depend on the constant looting, plundering, and pillaging of resources from other countries) have shown little to no concern over the barbaric behavior of their “governments”. False flag events and narratives are used as a pretext for aggression by hegemonic powers. When those narratives fall apart (as was occurring with the “Skirpal” incident), a new pretext for aggression is created (the latest factless chemical attack accusations against Syria). Is America the greatest threat to world peace? Polls overwhelmingly say yes. In this broadcast, an extremely important press release on the progress being made to expose the truth about 911, the most glaring false flag event of them all. As the truth on many fronts becomes all but impossible to hide, our government is doing all it can to monitor anyone who dares to tell it. The latest installment of Global Alert News is below.