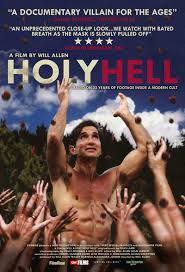 Will Allen, Director of Holy Hell, a documentary covering his life inside an eastern based spiritual cult, based on 22 years of his archival footage.
Will Allen starting making films in southern CA as a teenager. After earning his film degree from Southern Methodist University, in Texas, he ended up living inside a guru-based society for 22 years, where he continuously made films about the world in which he lived.
STORY
HOLY HELL premiered at Sundance and is an inside look at a spiritual sect, formed in West Hollywood and Austin, that dramatically imploded after 20 years  and then secretly resurfaced in Oahu.
After graduating from film school in 1985, Will Allen was a spiritual seeker who joined this community of like minded people led by a gay, charismatic actor from Venezuela. With camera in hand, Allen documented 20 years of life inside the community, as the group’s idealism begins to unravel and revelations about the nature of the leader are brought to light. With unprecedented and unparalleled access, HOLY HELL is a descent into a world no one, not even its participants past or present, could have imagined. The final scenes of the film take place in Kailua, where the group is currently active recruiting new members daily.
Background Summary:   Michael Connett is an attorney who has investigated the science and politics of fluoride for over 15 years. Connett serves as Executive Director of the Fluoride Action Network, a non-profit organization that challenges corporate and government actions that increase the public’s exposure to unsafe fluoride levels