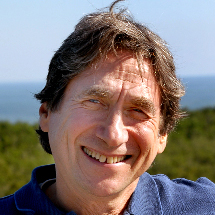 Harvey Wasserman brings to the air his half-century of joyous activism on issues ranging from peace, civil rights, legal cannabis and human liberties to No Nukes, election protection, people’s history, natural healing and much more.  Fukushima, about which he has written extensively and continuously, has deepened Harvey’s focus on shutting the nuke power industry and winning a Solartopian green-powered Earth.

Harvey has served as senior advisor to Greenpeace USA, for whom he spoke to 350,000 semi-conscious rock fans at Woodstock 2 (1994). He helped coin the phrase “No Nukes” and helped organize the legendary 1979 No Nukes concerts in Madison Square Garden.  In 2011 he spoke at the MUSE2 concert in Silicon Valley, and in 2013 circulated petitions for a global takeover at Fukushima that drew 150,000 signatures. He edits the www.nukefree.org website.

A co-founder of the global grassroots green power movement, Harvey began demonstrating for civil rights in 1962, at age 15. His 1966 U. of Michigan Daily editorial “The Use of Marijuana: It Should be Legal” circulated worldwide.  His Passions of the Potsmoking Patriots (written as “Thomas Paine”) portrays George Washington as a gay hemp head.

Harvey marched with Dr. Martin Luther King in Mississippi in 1966, and for peace in Vietnam, co-founding the legendary Liberation News Service in 1967.  In 1968 he helped found Montague Farm, a pioneer in the organic gardening movement. With Bob Fitrakis he helped expose the theft of the 2004 presidential election in Ohio; they have since co-written 5 books on issues of grassroots democracy and election protection.

As senior editor of www.freepress.org, Harvey’s articles circulate widely throughout the internet. He has appeared on the Today Show, Nightwatch, NightLine, Democracy Now, Charlie Rose, Lou Dobbs, Phil Donahue, National Public Radio and numerous other major media. Harvey Wasserman’s History Of The United States(1972) was introduced by Howard Zinn. His SOLARTOPIA! OUR GREEN-POWERED EARTH, introduced by Robert F. Kennedy, Jr., presents the vision of an ecologically sustainable, socially just, democratically-controlled planet which is at the core of all he does. It comes with theme songs by Pete Seeger and Dana Lyons, both of which are featured at the Solartopia Green Power & Wellness Show.

He warmly invites you to join the healing conversation with him on PRN!
Posting....