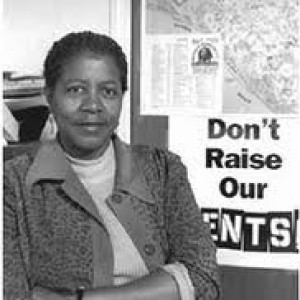 Nellie Hester Bailey is a human rights activist who has worked in peace and justice movements for over forty years. From her early organizing with the Student Non-violent Coordinating Committee, to tenant rights and anti-war struggles, to advocacy on behalf of women Bailey has been at the forefront of social justice and social change organizing.

Bailey co-founded the Harlem Tenants Council (HTC) in 1994. She currently serves as Director of the tenant led grassroots organization based on the self-determination tradition of radical activism that provides anti-displacement organizing for poor and working class families primarily in Central Harlem

Bailey is co-founder of Blacks in Solidarity Against the War that in 2005 help stage the largest anti-war demonstration in Harlem since the invasion of Iraq. A founding member of Cuba Solidarity New York Bailey traveled to Cuba on three separate occasions.

Bailey host s a weekly radio program “Inside Housing” on WHCR 90.3 FM Radio in Harlem. Media outlets that have reported on the work of Bailey and the Harlem Tenants Council include the New York Times, the New York Post, the New York Daily News, the Washington Post, the Amsterdam News, the Village Voice, The Final Call, the Guardian, BBC World News, NPR, WBAI, NBC, ABC and others. In 2007 NY1 profiled Bailey and the work of the Harlem Tenants Council for its Black History Month program. Bailey’s writings have appeared in the Amsterdam News, the Black Star News and the Working People’s Voice.