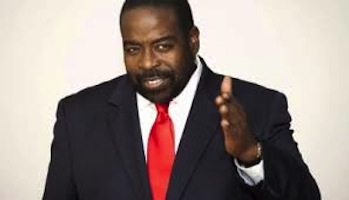 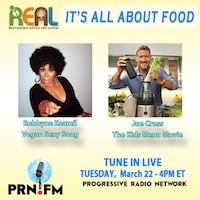 Part I: Robbyne Kaamil, Vegan Sexy Song
Activist, author, actress, comedian, vocalist, radio personality and relationship expert are all hats worn by Robbyne Kaamil. Robbyne’s sassy style has landed her appearances on numerous radio & television shows including The Howard Stern Show and Bravo’s, “Queer Eye for the Straight Guy”. As an actress Ms. Kaamil has graced the silver screen in several independent films including: Bear City: The Movie and Violet Tendencies starring Mindy Cohn of “Facts of Life”. Last summer her monthly advice column, “Dear Diva” was launched in Australia’s top gay publication DNA Magazine. She is also the Official Relationship Expert for Playgirl.
She was inspired to become an animal rights activist after seeing the PSA “Saving Lolita” which focused on the life of the orca Lolita who has been held at the Miami Seaquarium for over 45 years. She saw the parallels between Lolita’s story and her own family’s history in the Atlantic Slave Trade. She wrote the song “Let the Girl Go: Free Lolita” to help raise awareness about the orca. The music video was recently selected to be screened at the 2015 Wildlife Film Festival. Her latest music video, “Free the Monkeys”, exposes the mistreatment of monkeys being used in lab experiments in Hendry County, Florida. The video was produced & directed by NY Times bestselling author and former HLN television host – Jane Velez Mitchell. PETA co-founder, Ingrid Newkirk, recently enlisted Robbyne to write & narrate several public service announcements to protest animal captivity in marine parks, zoos & circuses. The PSA’s are currently running nationwide on ABC, FOX and Bounce TV affiliates.

Part II: Joe Cross, The Kids Menu
Joe Cross is a filmmaker, entrepreneur, author and wellness advocate. He directed, produced and was the subject of the award-winning documentary Fat, Sick & Nearly Dead, seen by more than 21 million people around the world, and the popular sequel Fat, Sick & Nearly Dead 2; authored the New York Times bestseller The Reboot with Joe Juice Diet book, which has been released globally in multiple languages; and is credited with having accelerated the plant-based eating movement by media outlets including the Wall Street Journal, The Times of London and The Dr. Oz Show. His website, www.rebootwithjoe.com, has become an integral meeting place for a community of more than one and a half million Rebooters worldwide.

Joe began his business career as a trader on the Sydney Futures Exchange where he worked from the early 1980s until 1998. He subsequently managed a diverse portfolio of assets in telecommunications, media, technology and financial services for Queensland Press Ltd., and in 2003 began investing his own capital through his investment vehicle Jaymsea Investments Pty Ltd. Despite his commercial success, Joe found himself at age 40 overweight and in ill health, and elected to take matters into his own hands. After consultation with noted US doctor Joel Fuhrman, Joe embarked on a 60 day journey of transformation across the US, consuming nothing but the juice of fresh vegetables and fruits. That journey – filled with personal milestones for Joe, and eye-opening experiences with average Americans– was captured on film, and has become the award-winning documentary Fat, Sick & Nearly Dead. Seen by more than 20 million people around the world, Fat, Sick & Nearly Dead has inspired millions of people to follow Joe’s example and reclaim their own health and vitality by adopting plant-based eating habits. The response to the film was so overwhelming Joe founded Reboot with Joe, a health and wellness company that offers support, encouragement, community, media and tools to everyday people. Joe lives in New York and Sydney.